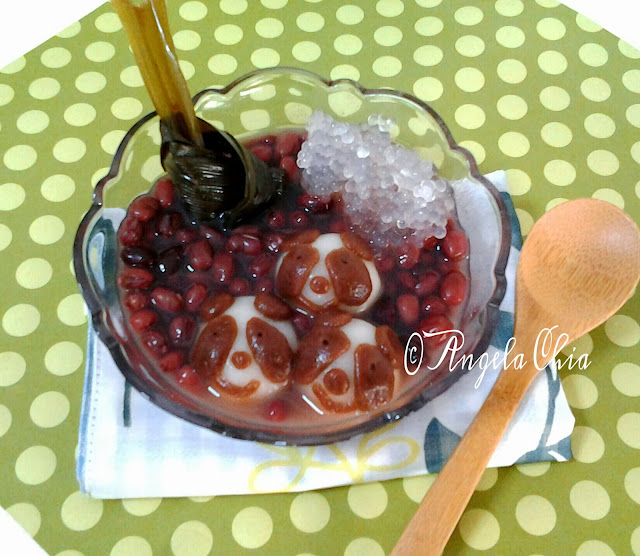 1) In a pot, bring 8 cups of water, red beans (drain away the water used for soaking), dried tangerine peel and pandan leaves to a boil. With the pot partially covered, simmer for 1 to 1.5 hour until the beans are soft and during the period, stir occasionally and top up with water when necessary or if u prefer it with more water. I used 10 cups. Note: U may cook it longer too until the beans have break down to your desired texture.

2) Bring a small pot to boil and add in the sago. Cooked for 10 minutes and stir occasionally until sago turned partially translucent. Off heat and leave sago in pot for 10-15 minutes until totally translucent which represent it's fully cooked. Ladle out the sago into a sieve and rinse sago in running tap water. Keep sago in a bowl of drinking water and set aside until ready to use.

3) Mix glutinous powder with water (add gradually) until a dough is form. Using 1/2 tbs portion (roughly 11-13g), roll dough into balls between palms. To shape the panda glutinous rice balls, please
view tutorial here. Bring a pot of water to boil and cook the balls in it. It's done when they float. Plunge balls in a bowl of cold/ice water. It helps to prevent the balls from sticking to each other and on top of that, add to a more chewy/springly texture.

4) When the red bean soup is done, add sugar (to taste) and stir till sugar is dissolved.

5) Serve red bean soup with the glutinous rice balls and a tbs or two of the cooked sago. This dessert may be serve chilled too.

Promote your Page too